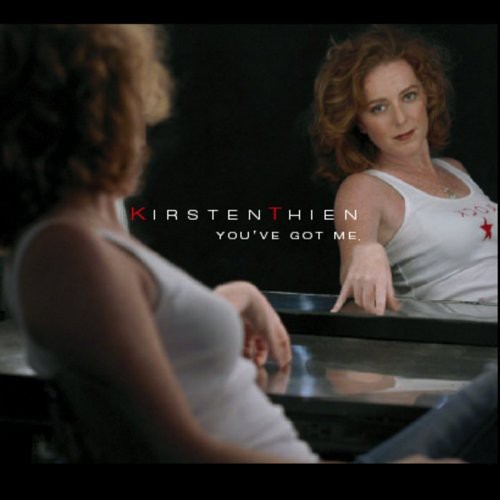 YOU'VE GOT ME
Artist: Kirsten Thien
Format: CD
New: Not in stock
Wish

It was just a few years ago that Kirsten Thien found herself graduating college, a degree in finance in one hand and an undeniably sultry singing voice and natural songwriting gift in the other, trying to figure out which way to go, 'Obviously, all through my college years, I planned on getting some sort of job in banking. I was heavily involved in music and performing in college but I didn't realize people did music as a career. In thinking it over, Kirsten decided to play it a bit safer. So, using her education and knowledge to finance her talent and ambitions, Thien went to New York, got herself what she thought would be a simple day job at Columbia University so that she could spend her evenings and weekends writing, performing and recording her music. The Columbia job went so well, however, that Kirsten found herself being promoted into bigger (and more demanding) positions. She even negotiated herself into a 4 day work week - hoping to give more time to her music, but she eventually started feeling as if she were living a double life. 'That didn't really work for me,' she goes on, 'because I soon realized that to make it in music, I had to be willing to give myself 100% to it.' So, she used the money earned at her job, invested it wisely (sometimes that finance degree comes in handy) and devoted herself fulltime to her God-given talents. A natural ability to write songs that tell life stories and a powerful, sexy singing voice that leave no doubt that Kirsten Thien is making the right choice. While her debut CD, She Really Is started building Kirsten a fanbase both with the public and the media, her new release You've Got Me places her poised on the verge of mainstream success. The blending of Kirsten's influences - blues, soul, rock and pop is handled so skillfully that there is a strong continuity on the CD in spite of the variety of genres represented. The bluesy quality to her voice and songwriting is the thread that holds the whole album together. While the voice is what hits you immediately, the maturity of her songwriting is equally impressive. The passion that is heard when listening to Kirsten's album is transformed into a confidence that can be felt when seeing her live on stage. It is an undeniable presence that captivates her audience, luring them closer with an intensity they can hear in her voice, see in her eyes and feel in the music. It took Kirsten awhile to write and record You've Got Me, but once you hear it, you know it was well worth the hours put into it. 'I am not one of those songwriters who can just say to myself, 'okay, I need another 4 songs and there they are,'' she explains.' 'Occasionally, I'll be hit with a full song at once, but usually there's the initial inspiration, followed by a lot of time and attention to a song until I feel 'okay that's it'.' Once the songs were ready, Kirsten shifted her attention to recording. 'I wanted the CD to sound live, but I had to do it on a budget that worked for me,' she explains, 'so rather than spend money on an expensive studio, I would drag the recording gear into musician's home studios, sometimes even their kitchens, and then take the tracks back and mix them together.' The songs on this CD all reach within both Kirsten and the listener and touch those experiences and emotions that everyone has known at some time in their lives. On 'See You Again', Kirsten brings the feelings of missing a lover home in the lyrics. By combining it with simple pop-rock rhythms the song becomes one of the strongest radio possibilities on the CD. 'You've Got Me' features her sexy voice pining about another type of distant lover while the foot-tapping quality of the chorus over the organ track hooks us in. It's one of those songs you'll find yourself humming to yourself hours after hearing it. Anyone who's had their heart broken will get lost in the lyrics to 'Thank You' And on the other side of the spectrum, when Kirsten belts out '...I'll make it up to me....' In 'If Ever', a song about finding the best love of her life, she proves that a girl from southern Maine can sing blues and soul as well as anybody. 'I like to tell people I'm from the south anyway,' she teases, 'southern Maine.' Kirsten's voice is dynamic in a way that could carry the album, but the instruments offer it a bed to sit on top of and the balance between the song lyrics about love and heartbreak, the classic melody lines and Thien's vocal delivery make for great listening, song after song after song after song...... The music on You've Got Me transcends it's genres and will prove in years to come that Kirsten Thien's music is that which will last through time and trends that come and go.